Pregnancy has been confirmed!  There may be pups available to performance homes or active pet/hunting homes.

The pedigree is an exciting blend of some of the great field and performance competitors and top producers of performance and show Goldens in the breed's history.

We expect that this pairing will produce healthy, good-looking, fast, focused, biddable puppies, willing and eager to do whatever their owners decide to do with them…but they will need a job!  The pups will be confident, moderate to high  drive, moderate to high-energy dogs with good biddability, intelligence and a good off-switch. Looks-wise, we should get attractive, well-built dogs that can withstand the rigours of  training and competition. 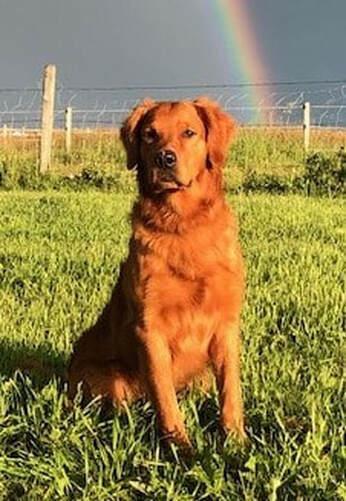 Topper  is a enthusiastic handsome boy with a huge work ethic and an impeccable temperament.  Topper's structure is solid, well angulated with good bone and a lovely head and expression and great pigment.   ​

His owner, Renee Schulte of Wynwood Goldens says this about him: "I did not have a goal to keep a puppy from Topper’s litter, until he was just too irresistible to pass up.

Early on, at 7 weeks of age, he showed me a temperament, body style and structure that I could not pass up.   He was a ‘stand out, eye catching’ pup in his litter.  Topper was very people oriented, following and interested in me from the start.  Rough and tumble play between he and I, was a game he enjoyed and always came back and up on my lap for more attention.  A confident puppy and avid retriever, he would not let the litter mates take the pigeon he had and would out run and maneuver his litter mates to keep possession of it.

Topper is now Qualified All Age and is a MH12 with lots more trials in his future.